Full spoilers for Horizon Zero Dawn. No spoilers for the Forbidden West. I wrote a mostly spoiler free article here.

Horizon is a beautiful, emotional and intellectually fascinating combination of technology, ecology, politics, psychology and spirituality. I see many connections to both technological optimism, deep ecology, spiritual science and egalitarianism.

I'm interested in positive alternatives for a better future. What can we do to make the Utopia real? I'm envisioning a harmony of nature and technology with people living in peace and creative freedom.

I'm not an expert in these topics. I'm just trying to explain what it is I find interesting in how this world is presented. I'll try to put it into words.

Here is the things I written about, in a series of separate posts:

The Point of the Spear

The beginning mission "The Point of the Spear" gives you the point of the game. To care about the petty narrow-minded people that has done nothing than shunned you.

Aloy: My tribe?! You said I wouldn’t need them.

Rost: But I never said the tribe wouldn’t need you! The strength to stand alone, Aloy, is the strength to make a stand. To serve a purpose greater than yourself. That is the lesson you must learn. And remember it… after the Proving, and after I am gone.

When the tribe finally realize that Aloy do have something of value to give, they fall to their knees:

Aloy: No! NO! Stop this! Up! UP! First you shun me, now this?! I will NOT be worshiped! I’m not your "Anointed!" I don’t belong to you! There’s a whole world beyond your borders. Whole tribes of people just as good as you, and it is all in danger! It’s a world worth fighting for. Not just here. Everywhere.

The game continually shows the limits of dogma. Ted thought the humans would be better of by returning to nature with a life without technology. But lack of knowledge will not end suffering. The technology can be used to destroy nature and all living things. But it can also be used to ease suffering, restore life and build a better world.

I have met people that has developed a scepticism against technology, and especially the view that environmental problems can be solved with advanced technology. There are a lot of valid criticisms against several techno utopian proposals. But that doesn't mean that the only solution is to revert to a life without computers or electricity. I believe nature and technology can live in harmony.

The game as a whole is a meditation on humanity in the space between nature and technology.

Miriam: Being smart will count for nothing if you don’t make the world better. You have to use your smarts to count for something, to serve life, not death. 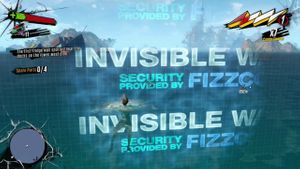 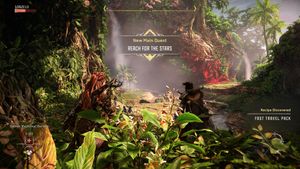 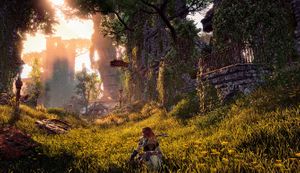